Below is an actual funding report written for Liverpool Cathedral. We feel it's important to show how donations are being used and the positive impact they bring.
2 December 2022
FUNDING REPORT FOR LIVERPOOL CATHEDRAL
Background

On 25 May 2021, The Road to Parity (TRTP) provided information about its activities to Liverpool Cathedral in support of an application for funding.

Following a successful bid, Liverpool Cathedral awarded £1,000 to the charity, which was acknowledged in writing on 29 September 2021.

All monies have since been put into action in line with the charity’s mission: to free developing nation households from extreme poverty through entrepreneurship.

The activation is also consistent with the charity’s declared objects: to relieve poverty in developing countries through the provision of micro grants to enable beneficiaries to participate in the local economy and sustain themselves and their families in a manner that would otherwise be beyond their reach.

The £1,000 enabled a total of 14 businesses to be set up in the slums of Delhi, mostly involving female entrepreneurs. They include tailoring businesses, a welding kiosk, an air conditioning repair business, a snacks stall, a fruit and vegetable stall, and a home-based cosmetics and beauty parlour. The businesses have all been profitable and collectively support more than 70 household members.

The Road to Parity operates a poverty alleviation initiative in India called Project Unnati. It is run in conjunction with partner, Learning Links Foundation, a registered and respected NGO in India.

Under Project Unnati, people in extreme poverty are given the opportunity to start a business with the help of a micro grant. Using a strict screening and monitoring process, entrepreneurs are identified and provided with the equipment and supplies necessary to begin trading.

Unlike many similar initiatives in developing nations, the small grant available through Project Unnati is not a loan and does not need to be repaid. TRTP believes people in extreme poverty have suffered enough.

The project was named Unnati (meaning progress) after one of the first beneficiaries said she felt her new business would bring prosperity to her family after years of desperate poverty.

While TRTP currently only has a presence in India, the charity’s long-term plans are to expand to other developing countries.

Slum areas of the Indian capital, Delhi, are visited to identify aspiring entrepreneurs. Details of prospective beneficiaries are captured in a pre-defined format. Once the details are captured, a screening process starts.

Beneficiaries are screened using a strict points system. At its core is identifying people in extreme poverty – households who have been scraping an existence on around £10 or less, per person, per month.

Once a beneficiary has been identified, a discussion takes place on the equipment, supplies and stock that are required to get the business off the ground. Once this is agreed with the entrepreneur, the necessary items are sourced and procured. This supervised process is eased for recurrent business themes, such as the popular vegetable carts and boiled egg stalls. The average grant awarded is around £50.

Each beneficiary receives support to ensure their fledgling enterprise succeeds, such as guidance on record keeping, negotiation skills, handling customers and marketing. This three-month period of support helps overcome initial challenges and provides a path for success. It is made clear from the start that the grant is one-off assistance and there is no coming back for more money.

A total of 14 businesses were established during 2022. Of the 14 entrepreneurs, 11 are women and 3 are men. Previously, the beneficiaries were either unemployed, getting money from relatives, or existing on highly unstable labouring income in slum districts of Delhi. Household income increased by up to 100% with an average household increase across the businesses of 69%.
The businesses are particularly significant because they are simple, quickly become profitable, support entire households, and allow families to become financially independent. Three months after the beginning of trading, all were continuing in the same business. ​ 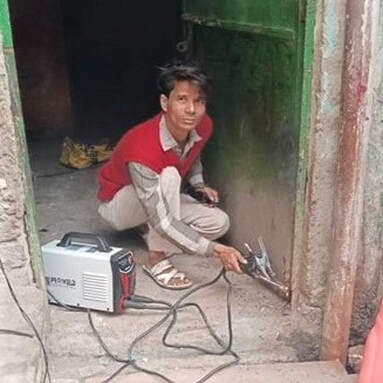 ​Shivcharan is originally from Ibrahimpur village in the Gorakhpur district of Uttar Pradesh state, India’s most populated state with more than 200 million people. His parents brought him to Delhi as a child when they migrated in search of employment.

Shivcharan eventually learnt how to weld and started working in a factory.

During Covid, work dried up and his financial situation quickly deteriorated as he tried to support his family. It was during this time that the Project Unnati outreach team came across him.

Given his skills, Shivcharan was keen to set up his own welding kiosk, so that he was no longer exposed to unstable employment.

Shivcharan had some of his own tools, but, crucially, needed a welding machine. After being assisted with a micro grant, Shivcharan proudly opened his iron welding kiosk.

With his commitment and enthusiasm, Shivcharan is doing well and makes an average monthly profit of 9000 to 10,000 Indian Rupees (approximately £100). This is double what he was intermittently earning before.

Shivcharan is now very happy and hopeful for the future. He’s continually seeking new customers and adding new services to grow his venture in order to better provide for his six-strong household. He is extremely grateful to the Project Unnati team for his life changing opportunity. 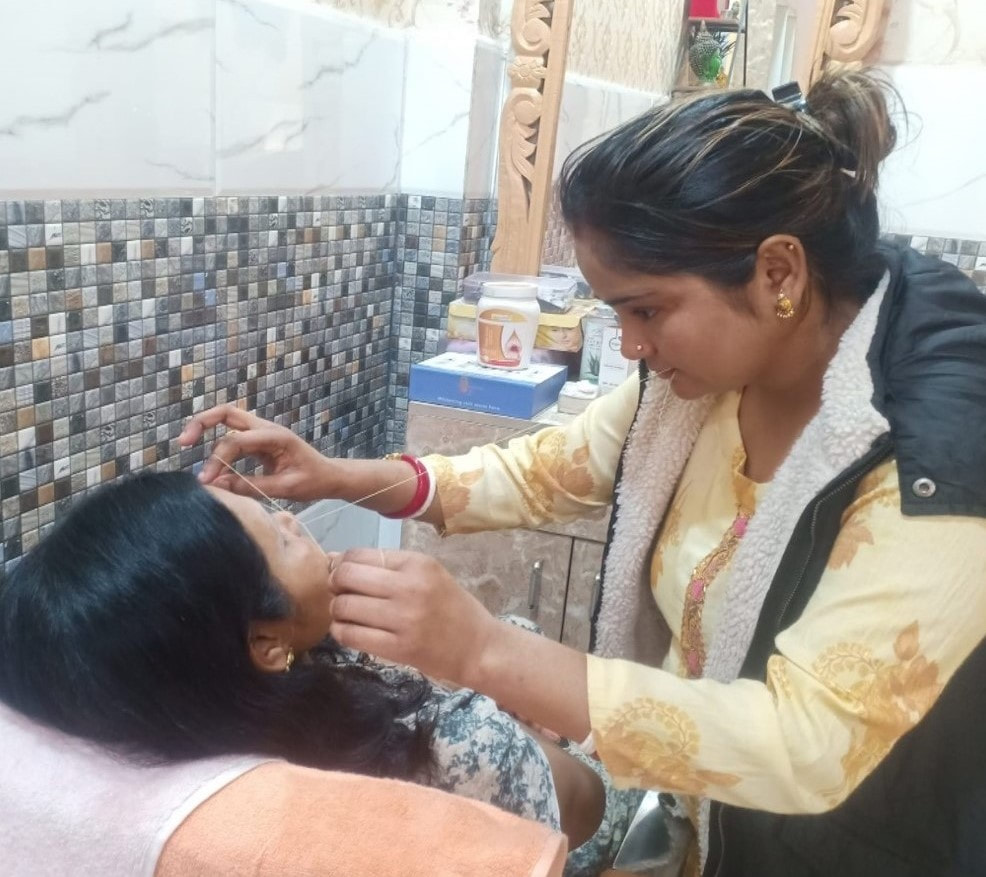 Meena: previously unemployed, now with her own home-based cosmetics and beauty parlour 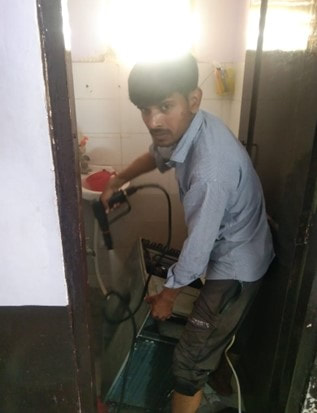 Mohd. Sarfaraz comes from a background of extreme poverty.

The 26-year-old hails from Gaus Nagar, a village in the Madhubani district of Bihar state. Like many others, he migrated to Delhi in search of a better life.
​Before Covid struck, he worked in an air conditioning repair shop, and while he could sometimes earn 5,000 Indian Rupees a month, he was at the mercy of a boss who made arbitrary salary reductions.

The pandemic made the situation even more desperate with increasingly meagre wages to support him and his parents.

The Project Unnati outreach team came across Mohd. Sarfaraz - and after learning of his AC maintenance skills, offered him a path out of his misery.

He jumped at the opportunity and received support to buy AC cleaning equipment. His little business is taking off and he now makes an average profit of around 9,500 Indian Rupees per month (approx. £95). This is more reliable income and almost double what he earned before.

Mohd. Sarfaraz aspires to have his own shop and team in the future and is deeply grateful for the opportunity he’s been given. 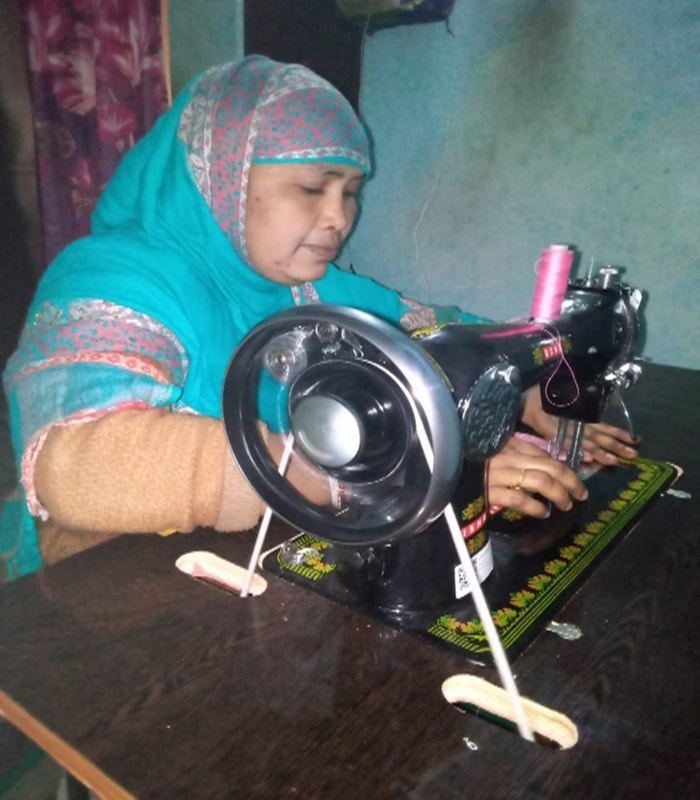 Tabassam, previously struggling as a domestic helper, now has her own tailoring business

The £1,000 (approximately 100,000 Indian Rupees) funded the identification and assessment of 14 beneficiaries, the provision of equipment, supplies or stock, business training, initial handholding, and a review after three months.

Project Unnati is proven as a simple yet highly effective poverty alleviation model, grounded in academic research conducted in rural India and leading to the book, Marketing in the Dark.

In 2023, we can significantly scale up with the right coalition of funders as we continue to help those in extreme poverty in the face of Covid impact and global financial pressures.

The Road to Parity - snapshot

​The Road to Parity was formed in 2018 in Southport. The following year, the first batch of micro grants was issued under Project Unnati in India to people in extreme poverty. Since then, the charity has supported over 80 businesses, benefitting more than 400 people.

The charity is run on an ultra-lean basis. It has no full-time staff, no marketing budget, and funds only a partial salary and on the ground expenses during outreach in the slum communities of Delhi. Those managing the charity work on a voluntary basis and contribute outside of their full-time jobs.